The function of a slate roof Austin is to provide shelter, shed rain and snow, and resist wind and other loads. This is achieved with simple and adaptable methods of installation that have proved successful for centuries around the world. In many cases, local requirements, or necessity, lead to the development of slating styles that suit or benefit from the regional supply of material. In other cases, it is the genius of the design professional, roofing contractor, or building owner that deserves the credit for creating a spectacular roofscape. 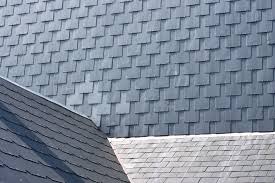 Patterned Slate Roofs Austin – By introducing slates of different colors or shapes in a specific design or in courses, individual accents or banding can be created as part of the design characteristic of a slate roof. For layout reasons, these patterns are most frequently incorporated into standard slate roofs. Accents may include, floral and geometric patterns, dates, words, or names. Pattern catalogs were available from some quarries and slate distributors in the past.

Random Width Slate Roofs – Random width slate roofs share the attributes of a standard slate installation, but employ slates of one length and thickness in a variety of widths. These slates are laid in courses to provide adequate joint offset, while not maintaining joint alignment.

Multicolored (Blended) Slate Roofs – Where a variety of colors is available, it is common practice to blend mixtures of various colors together to create a multicolored slate roof. Although possible for a uniform size slate roof, multicolored slate roofs are most commonly achieved using a random width installation. As few as two colors can be used and commonly up to 4; however any number is possible. Where unfading slate colors are part of the blend, it can be effective to use some complementary semi-weathering colors to ease the transition between colors.

Graduated Length Slate Roofs- The practice of installing slates of varying lengths and widths on a roof came from the days when some quarries produced slate on an “as available” basis rather than in specified lengths and widths. This led to the roofing contractor sorting the slate on site and installing the longest and widest slates at the eaves (where they carried the most water) and “graduating” several other lengths into the roof in courses so that the shortest and narrowest slates were at the top of the roof, where they carried the least water. The normal exposure of each length was maintained, decreasing from the eave to the top of the roof. A well laid-out graduated slate roof should show no discernible break between the various lengths of slates used as they move up the roof.

Graduated Length / Graduated Thickness Slate Roofs – Slate of three, four, or more successive thicknesses are commonly incorporated into graduated length roofs with the largest and thickest slates at the eaves. The slates are then laid with diminishing lengths and thicknesses until the smallest and thinnest slate are at the top. Slates at the eave could be 1 inch thick, or more, and the 3/16 inch thick at the top of the slope.

Textural Slate Roofs – The uses of slates of rougher surface textures and thicknesses, mixed throughout a roof, creates a textural slate roof. The method of installation leaves slates of varying thicknesses lying adjacent to each other, creating a rougher hewn appearance. As the slates are rougher and thicker, it is common for textural slate butt corners to be randomly missing to acceptable dimensions.

Hang-down (Staggered Butt) Slate Roofs – Another architectural variation of a basic slate roof installation is the random use of longer slate, with their heads laid to the same course line or higher, and their additional length projecting past the butt line of other slates. This creates a hang down appearance.